Dist::Zilla is a little bit of a two-edged blade. Whereas it enormously simplify things for the module author, it can also create quite the speed bump for the casual contributor. Not only the content of the repository can diverge strongly from the distribution (“dude, where’s the Build.PL? And what the heck happened to the POD?”), but to transmute that repository code into its distribution-ready incarnation, one has no choice to do the zilla dance. That is, if one can. In my experience it’s not unusual to stumble on distribution with a dist.ini that has plugins that are either onerous to get working on my machine or, worse, are not compatible with their latest versions on CPAN. Indeed, I can remember a few cases were it took more time to get dzil build to work than it took to write the code patch itself.

In an effort to remove that potential hurdle from my own distributions, I’ve developed a certain pattern that, so far, seems to do the trick. In my dist.ini, I leverage the wonderful Dist::Zilla::Plugin::Git and have:

The magic is in Git::CommitBuild. By itself, Git::CommitBuild commits the result of a dzil build on a branch called build/original branch. Those are throwaway branches that I typically never push to my public repository, but that are very useful to have a quick peek at what the Dist::Zilla-generated code will look like.

However, it’s the optional release_branch parameter that interest us here. When defined, the plugin also commits the build content to the given branch on a dzil release. In other words, it provides us with a branch containing the exact code that goes out on CPAN. It’s a tidy branch too, with one commit per release, just like what GitPAN or git-backpan-import from Git::CPAN::Patch would give you. Except that it’s even a bit better as it also keeps the relationship with the development branch it comes from. For example, here is what Catalyst::Plugin::MemoryUsage’s repo looks like: 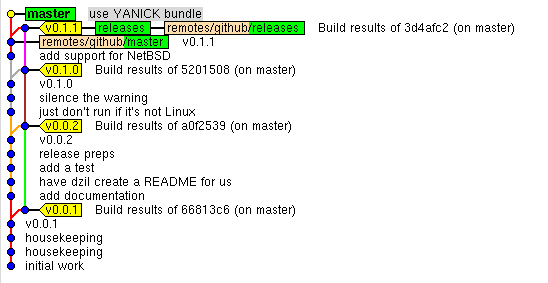 So, basically, the repository ends up having two main branches, master, on which the development is done, and releases, that automatically keeps track of the “real” released code.

GitHub can even sweeten the situation a little bit more. In the administration page of a project, it’s possible to switch the default branch from master to releases. That way, the casual downloaders/patchers/curious souls initially see a version of the code that they can relate with what’s on CPAN. And if they are brave enough to dive in its Dist::Zilla counterpart, it’s also there for them.

And there is a last, very nice bonus feature of that way of doing things. We can auto-populate the README.mkd of the project by using Dist::Zilla::Plugin::ReadmeMarkdownFromPod and adding the following to dist.ini:

For an example of the resulting generated README.mkd, you have have a gander at my Task-BeLike-YANICK GitHub page.